Some good news for the millions of fans of Colombian Coffee.Farmers who fled war in the Colombian Andes are returning to revive their abandoned land, cultivating coffee trees that are boosting global supplies of the highest-quality Arabica beans.
Colombia's five-decade civil war, the longest in the Americas, displaced millions and disrupted farming for decades in areas that produce coffee for the most exacting consumer. A peace deal between the government and the rebel Revolutionary Armed Forces of Colombia (FARC) in late 2016 paved the way for many to return to their homes and farms, including thousands of coffee growers
The revival of coffee farming in the former conflict zones could help boost Colombia's coffee output by 40 percent. That would raise global supplies of mild Arabica beans by about 13 percent. The additional supply could reduce the cost of the raw material for the world's top roasters, many of whom are seeking to secure increased supply from Colombia.
About 950 coffee-growing families of the 1,600 families, who left during the war, have returned to the San Carlos area, according to data from the Colombian Coffee Growers Federation (FNC). The supply from this region, 205 miles North West of Bogota, could expand further as farmers plant more of their land and more people return to the region to provide the needed labour.
The area now has about 800 hectares of coffee farms, double the low of 400 hectares during the war.
Among those who returned was Libardo Garcia, who moved back to his 12-hectare (30 acres) farm in 2015 after fleeing in 2001."All the coffee trees were dead when we came back," said Garcia, who has since planted 8,000 trees on two hectares of steeply sloped land.


Arabica is the highest quality coffee bean, and Colombia is the world's top producer of mild Arabica. To make that variety, beans are separated from the cherry then dried to increase quality. Arabica makes up about 60 percent of global coffee supplies, with lower-quality Robusta beans accounting for the rest. 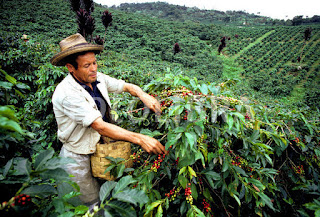