From Wikipedia, the free encyclopaedia
Camp Coffee has a smooth flavour of chicory and coffee but with a very sweet, predominantly chicory aftertaste.

Camp Coffee is concentrated coffee-flavoured syrup, consisting of water, sugar, 4% caffeine-free coffee essence, and 26% chicory essence. It is generally used as a substitute for coffee, by mixing with warm milk in much the same way as cocoa, or added to cold milk and ice to make an iced coffee. It is still a popular ingredient for home bakers making coffee-flavoured cake and coffee-flavoured butter cream.

Legend has it that Camp Coffee was originally developed as a means of brewing coffee quickly for military purposes. The label is classical in tone, drawing on the romance of Empire. It includes a drawing of a Gordon Highlander (allegedly Major General Sir Hector MacDonald) and a Sikh soldier sitting together outside a tent, from which flies a flag bearing the drink's slogan, "Ready Aye Ready".

In late 1975, Camp Coffee became a popular alternative to instant coffee in the UK, after the price of coffee doubled due to shortages caused by heavy frosts in Brazil. 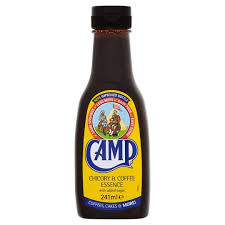 Café du Monde (French for "Café of the World" or "the People's Café"), is a renowned open-air coffee shop located on Decatur Street in the French Quarter of New Orleans, Louisiana. It is a New Orleans landmark and tourist destination, known for its cafe au lait and beignets.
The cafe au lait is a blend of coffee and chicory and is a traditional favourite of many a New Orleans native. Coffee and chicory blends are best enjoyed with warmed milk in the “au lait” style.


The root of the chicory plant is roasted and ground, then added to the coffee to soften the bitter edge of the dark roasted coffee. It adds an almost chocolate flavour to the cafe au lait served at Cafe du Monde. 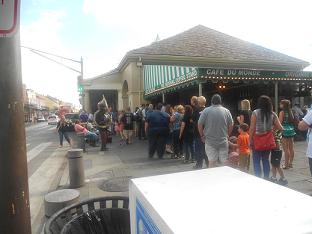 Posted by caer urfa coffee at 00:19 No comments:

Chicory was cultivated as early as 5000 years ago by Egyptians as a medicinal plant. Ancient Greeks and Romans used chicory as a vegetable and in salads believing it had benefits for the liver. There are references to it in the writings of Horace, Virgil, Ovid, and Pliny. The wild root may have been used for food, but it is likely that it was a last resort, since it is woody and incredibly bitter. Cultivated roots, (when young and tender) on the other hand, are consumed to this day, particularly in Belgium.

Exactly when the root was first roasted to be used as a coffee substitute is unclear. There are references to the use of wild chicory root as a coffee additive in colonial America like Louisiana. It is known that its use in this form was widespread in France after Napoleon initiated the ‘Continental Blockade’ in 1808, which deprived the French of most of their coffee.

When the blockade was lifted the French continued to use chicory as an additive because they believed it was good for one’s health and improved the flavour of coffee. Chicory use grew with the advent of the Civil war when trade disruptions and blockades disrupted deliveries of coffee. But this was a substitution of necessity, not choice, so when the war ended, chicory use decreased as prosperity improved and coffee became more readily available. Except in New Orleans and parts of Louisiana where its use was a matter of preference not necessity. Of course, chicory use, as an economical additive in coffee is widespread throughout the world. But, in New Orleans, this economic rationale ignores the influence of 19th century French culture on the cuisine, and does nothing to explain the continued preference for coffee and chicory, even when chicory becomes more expensive than many coffees. 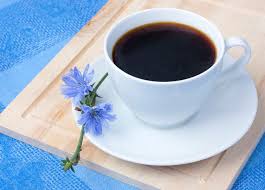 www.caerurfacoffee.co.uk
What is Chicory?
Chicory is grown in many parts of the world, with the largest producers in France and South Africa, even in the U.S. in the state of Nebraska.

Chicory is the roasted and ground root of the cultivated plant species, Chicorium Intybus, subspecies Sativum. Chicory is a forced crop, grown in complete darkness, which accounts for its blanched white, yellow-tipped leaves. It has a distinctive, cigar-like shape, about 12cm long, and the crisp leaves have a mildly bitter flavour. It is used to make a hot drink which is a coffee substitute by first roasting and then grinding the chicory root or by creating a blend of chicory root and coffee. The ratio of coffee to chicory can be as high as 3 to 1, or as low as 1 to 3. 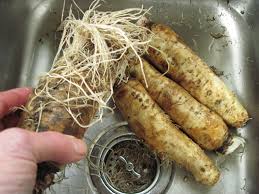 Never mind the world cup we went to see South Shields FC known as the Mariners  play Consett on Friday and what a game – South Shields recently promoted from the Evo stick north league to the NPL Premier Division their second promotion in consecutive years, were the domineering side although a friendly the players had to perform. Good to see a local team with vitality and spirit go forward eventually winning 2 – 1 with new signings Josh Gilles and midfielder Dan Lowther the Mariner goal scorers.
EBAC Northern League Division 2 - 15-16
EBAC Northern League Division 1 - 16-17
Evo stick north - 17-18

Have you ever wondered how the use of coffee filters came about – here is an interesting story – A German entrepreneur Amalie Auguste Melitta Bentz (31 January 1873 – 29 June 1950) invented the coffee filter on 1908.
At the time to make a coffee they used percolators but as we know if left are prone to over brewing, espresso-type machines tended to leave grounds in the drink, and linen bag filters were tiresome to clean.
After experimenting with many different materials it’s said she ended up using blotting paper from her son Willi's school exercise book and a brass pot perforated using a nail. The result was grounds-free, less bitter coffee; success so she decided to set up a business.
The Imperial Patent Office granted her a patent on 20 June 1908, and the company was entered into the commercial register, and during the 1909 Leipzig fair they sold 1,200 coffee filters.
In 1910, the company won a gold medal at the International Health Exhibition and a silver medal at the Saxon Innkeepers' Association.
By 1932 she transferred the majority stake of the company to her two sons Horst and Willi, but she still kept a hand in the business.
Although during the Second World War production stopped by 1948 business resumed and at the time of Amalie death in 1950, the company was worth some 4.7 million Deutsch marks.
Today her grandchildren Thomas and Stephen Bentz still control the Melitta Group headquartered in Minden in the east of North Rhine-Westphalia. 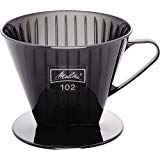 Posted by caer urfa coffee at 02:04 No comments:

As we all know there are many ways to brew your coffee. A popular method on the market is the pod to cup machines they are an affordable way to produce a great coffee. However there was a financial implication when using this method. The pods were expensive to buy and could only be used once creating concern over both financial and environmental waste. As we at Caer Urfa Coffee recently learnt from a customer there are now reusable pods which you can fill yourself using your favourite coffee. So why not buy some reusable pods and then use Caer Urfa Coffee to fill them. Here after a little research here are two we checked out as seen on Amazon of many items available