I know that most people don’t like to throw the used ground coffee down the sink for fear it will block the waste pipe so here are some useful ideas on what to do with the coffee grounds left over after brewing your favourite cuppa.
Compost:
Spent coffee grounds can be mixed with lye to make a great composting agent, you can even throw in the paper coffee filter, too!
Worms in compost like to eat the bacterium that grows on the facets of coffee grounds, though the grounds themselves are a food source it also adds grit to the worms' digestive system allowing them to digest better.
Fertilizer:
Small amounts of coffee grounds can be added directly to top soil, especially on plants that like high acidity in the soil like azaleas or roses. Coffee is high in nitrogen, calcium, magnesium, potassium and other trace minerals, spreading around a thin layer of coffee grounds on your soil will allow a slow release of these minerals into your plants.
Be aware of which plants like acidic soil (roses), and which plants don't (tomatoes).
Insect Repellent:
Coffee has a very strong odour which many insects and animals do not like. In addition, it's been suggested that mosquitoes, ants, slugs and maggots all dislike the acidity of coffee and will stay away from areas where there is high concentration of acidic soil.
Cat deterrent:
If you are bothered by your neighbour's cat or dog in your flowerbed? Sprinkling coffee grounds along with other powerful odour-emitting substances can keep those animals away. Most animals' sense of smell is much greater than ours, and while coffee that may smell great to us can smell very unpleasant to a hyper-sensitive-olfactory feline.
Used coffee grounds can be mixed with orange peels (or other citrus) and spread around flowerbeds for an inexpensive pet deterrent.
Posted by caer urfa coffee at 23:50 No comments: 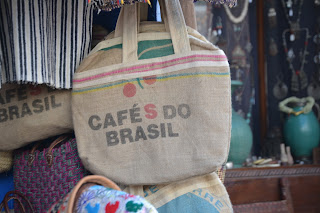 Useful use of used coffee bags make them into cushions or hand carrying bags
Posted by caer urfa coffee at 00:33 No comments: