PROMOTION – COMPETITION
‘Caer Urfa Coffee’ – artisan coffee that’s roasted to perfection.
How to play
For a FREE
The winner of the competition chooses from a range of coffees that's on our web site
A 250g bag of Caer Urfa’s Coffee – wow!!
Go to ‘wwwcaerurfacoffee.co.uk’ and choose.
Write to us with your answers to info@caerurfacoffee.co.uk – found on our web page www.caerurfacoffee.co.uk
With your Name / address (for delivery) / and stipulate beans or ground
We assure you that you will not receive any advertising from us except maybe a Christmas card.
Competition runs until the 24th February 2018
There will be only one winner
In the event of more than one player completing all the questions correctly, the winner will be selected at random
The winner will receive one bag of 250g of Caer Urfa Coffee of their choice
The winner will be announced shortly after the 24th February (Only if he or she wishes to be named on our facebook/web page/blog)
The Caer Urfa coffee management will make the final decision

1. What was coffee first known in Europe as?
a. Arabian Tea
b. Arabian Brandy
c. Arabian Sin
d. Arabian Wine

2. Which of the following countries ranks in the top ten worldwide in per capita coffee consumption?
a. United Kingdom
b. Argentina
c. Russia
d. Iceland

3. Who took his coffee mixed with champagne and mustard?
a. George Washington
b. Louis XIV
c. Frederick the Great
d. Kaiser Wilhelm

4. What famous London insurance company started as a coffee house?
a. Harrods
b. Fortnum and Mason
c. Abercrombie and Fitch
d. Lloyd's of London

6. In New Orleans, what is commonly added to coffee to make it last longer?
a. Chickpeas
b. Chicory
c. Water
d. Cinnamon

8. What is the name attributed to the Ethiopian goatherd who supposedly discovered coffee?
a. Kelasah
b. Kalmah
c. Kaldi
d. Kadas

9. What are the three most popular commercial coffee beans?
a. Arabica, Liberia, and Robusta
b. Arabica, Kinta, and Melina
c. Arabica, Kashimira, and Sauda
d. Arabica, Pacifica, and Zesta

10. Country of Origin: Turkey
Ingredients: Ground coffee, cold water, (?) mystery ingredient
Turkish coffee begins with finely ground coffee and cold water, then boiled in a "cezve". Sugar can be added during the process, but isn't always. One last ingredient is often added; what type of seedy spice is it?
a.       Vanilla
b.      Lotus
c.       Sesame

Coffee leaf rust (CLR)
Coffee rust is a disease with the power to hinder, or even wipe out, a country’s national product.
Rust was first reported in 1879 by the English mycologist Michael Joseph Berkeley and his colleague Christopher Edmund Broome. Berkeley and Broome named the fungus Hemileia vastatrix, Hemileia referring to the half smooth characteristic of the spores and vastatrix for the devastating nature of the disease. They received their specimens from Sri Lanka where the disease was already causing enormous damage to productivity.
Many coffee estates in Sri Lanka were forced to collapse or convert their crops to alternatives, such as tea. By 1890 the coffee industry in Sri Lanka was nearly destroyed. Sri Lanka switched to tea production as a consequence of the disease, historians have since suggested this is one of the reason why Britons have come to prefer tea.
As of 1990, coffee rust had become endemic in all major coffee-producing countries, so what is the answer? Well in Timor in 1927 a naturally occurring hybrid of arabica and robusta was found. Its crucial feature: unlike normal robusta, is it can be bred again with arabica varieties, which means that it can transmit its rust resistance to them. To note, coffee rust attacks Arabica coffee, but not the Robusta.
By 1980, the first hybrid of Caturra – the dominant variety grown in the country was good enough to be accepted by growers and buyers – the Timor hybrid was called Colombia. However some years later the fungus as expected evolved, therefore Caturra maintains only a partial resistance, so the need for continued development.
Cenicafe of Columbia has developed other varieties. In 2005, they released a new seed, called Castillo after Jaime Castillo Zapata, the lead scientist behind the development of Colombia.
By increasing the gene pool, coffee scientists also aim at protecting the crops from other risks. By reducing genetic diversity, you have less resistance to climate, pests and diseases.


In some quarters it is believed Castillo is not a matter of luxury, it is a matter of necessity. 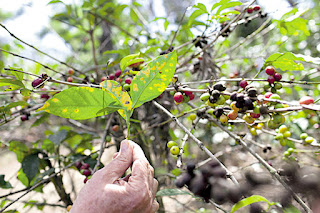 Posted by caer urfa coffee at 14:52 No comments:

The best way to decaffeinate coffee.

There are about 10% of coffee lovers who would like to enjoy a good cup of coffee without the stimulating effect of caffeine and we at Caer Urfa coffee sell as whole beans or ground a fine decaffeinated Colombian coffee. We are often asked how these beans are decaffeinated as people seeking the health benefits of drinking caffeine free coffee do not want these outweighed by the residue of chemicals left by some of the processes used to remove the caffeine.
Our coffee is decaffeinated by the Swiss Water Process. This is a non-solvent method for decaffeinating unroasted coffee beans. It was introduced by Coffex in 1979, and was, at that time, the only commercial decaffeination method that did not use solvents. In 1988 the Swiss Water Method was finally introduced to the market and its facility is based near Vancouver, British Columbia, Canada. This decaffeination facility is the only facility in the world certified organic by both OCIA and Aurora Certified Organic. In addition, they are also certified Kosher by the Kosher Overseers Association.

The challenge is to try to separate only the caffeine from the coffee beans while leaving the other chemicals at their original concentrations. Not an easy job as coffee contains somewhere around 1,000 chemicals that are important to the taste and aroma of this wonderfully complex elixir.
The Swiss Water Process relies on two concepts, solubility and osmosis, to decaffeinate coffee beans. It begins by soaking a batch of beans in very hot water in order to dissolve the caffeine. The water is then drawn off and passed through an activated charcoal filter. The porosity of this filter is sized to only capture larger caffeine molecules, while allowing smaller oil and flavour molecules to pass through it.

Consequently we end up with beans with no caffeine and no flavour in one tank, and caffeine-free “flavour charged” water (aka “Green Coffee Extract”) in another tank. The flavourless caffeine-free beans are discarded, but the flavour rich water is reused to remove the caffeine from a fresh batch of coffee beans. Since this water already is saturated with flavour ingredients the flavours in this fresh batch can’t dissolve; only caffeine moves from the coffee beans to the water. So the result is decaffeination without a massive loss of flavour.
Posted by caer urfa coffee at 05:32 1 comment: