It's with Great Pleasure we announce the
Caer Urfa Coffee Promotional Competition 2018
WINNER
Janet Panter from Westbourne
With Willie Downes from Blandford as a RUNNER UP
A 250g bag of your chosen coffee is whizzing its way to you - We at Caer Urfa hope you enjoy - Thank you to you and all the entrants. 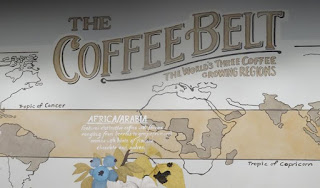 Posted by caer urfa coffee at 06:25 No comments:

www.caerurfacoffee.co.uk
PROMOTION – COMPETITION- RESULTS
‘Caer Urfa Coffee’ – artisan coffee that’s roasted to perfection.
Thank you all for taking part in our Promotion/Competition – The winner will be announced later today
ANSWERS
1. What was coffee first known in Europe as?
Arabian Wine
2. Which of the following countries ranks in the top ten worldwide in per capita coffee consumption?
Iceland
3. Who took his coffee mixed with champagne and mustard?
Frederick the Great
By any standards, this was an eccentric habit, but apparently it didn't harm him.
4. What famous London insurance company started as a coffee house?
Lloyd's of London
Edward Lloyd's Coffeehouse opened in 1688. Coffee houses became the place to socialize and certain occupations tended to congregate at certain coffee houses.
5. What event caused Americans to start drinking coffee instead of tea?
Boston Tea Party
The Boston Tea Party was the American response to the British tax on tea. A bunch of men, dressed up like Indians dumped crates of tea into Boston Harbor to protest the tax. It became patriotic to drink coffee after that.
6. In New Orleans, what is commonly added to coffee to make it last longer?
Chicory
Louisiana was originally a French Colony. During the French Civil War, coffee was scarce, so chicory was added, to stretch the coffee and to decrease the bitterness. Cafe du Monde in New Orleans is known for its various coffee blends with chicory.
7. If you ask for a 'latte' in Italy, you won't get coffee. What will you get instead?
Milk
8. What is the name attributed to the Ethiopian goatherd who supposedly discovered coffee?
Kaldi
According to legend, he discovered it after he noticed his goats becoming frantic after eating the coffee beans.
9. What are the three most popular commercial coffee beans?
Arabica, Liberia, and Robusta
10. Country of Origin: Turkey
Ingredients: Ground coffee, cold water, (?) mystery ingredient
Turkish coffee begins with finely ground coffee and cold water, then boiled in a "cezve". Sugar can be added during the process, but isn't always. One last ingredient is often added; what type of seedy spice is it?
Cardamom

Cardamom is the third most expensive spice by weight, after saffron and pure vanilla, making it a more prestigious preparation when considering Turkish coffee. Turkish coffee has a long tradition in many countries, but is slowly being replaced by other hot beverages, such as tea
Posted by caer urfa coffee at 00:41 No comments:

www.caerurfacoffee.co.uk
Not a place known to grow coffee, but Sweden has some wonderful independent coffee roasters and a thriving coffee culture.
A recent visit to Åre in Sweden we came across this trendy coffee shop. Åre Kaffeeroasteri - the winner's of the 'world roasters cup', here we had a delicious Honduran coffee relaxing after a hard day on the ski slopes. 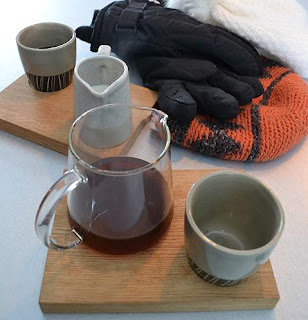 Posted by caer urfa coffee at 00:30 No comments:

www.caerurfacoffee.co.uk
February's promotion 1kg of Arabica special blend for £15 - A mixture of 100% Arabica beans harvested from Central and Southern American as well as Africa. The Southern American beans gives this blend an ideal base from which to make an excellent cup ideal for espresso added to which is the sweet and lingering taste of our Central American beans and finally a small percentage of African put in to give this coffee that extra earthy edge, once you have tasted this delightful blend you will be back for more.
We offer a free delivery service in the Poole & Bournemouth areas - enter cr11 when you order for your free delivery only accepted in the Poole & Bournemouth areas.
Posted by caer urfa coffee at 01:05 No comments: