We have just had a great lunch at the Riggers restaurant at the RNLI training college in Poole, Dorset. While we were there we looked at the displays about the foundation of the RNLI and particularly at the story of Grace Darling. She has a special significance for us as there is a memorial to her in our home town of South Shields as her heroic rescue occurred just up the coast of Northumberland. For those not familiar with her story and how it led to the foundation of the RNLI here is a shortened version.

Grace Horsley Darling was born on 24th November 1815. Her father was a lighthouse keeper employed by Trinity House and when she was a small child Grace was taken to live in a cottage beside the lighthouse on Longstone Island one of the Farne Islands off the Northumberland coast.
In the early hours of 7 September 1838, Darling, looking from an upstairs window, spotted the wreck and survivors of the Forfarshire on Big Harcar, a nearby low rocky island. The Forfarshire had foundered on the rocks and broken in half: one of the halves had sunk during the night the survivors were clinging to the bow section which was stuck on the rocks. The stormy weather meant that the lifeboat at Seahouses, further down the coast at Sunderland, could not assist so Grace and her father rowed a mile in the rough seas to the survivors using the shelter of the islands. Darling kept the small boat steady in the water while her father helped four men and the lone surviving woman, Mrs. Dawson, onboard. Of the 62 persons on board only 14 survived. When the lifeboat eventually managed to sail from Seahouses they found only the bodies of Mrs Dawson’s two children and a vicar on the rocks.
As news of her role in the rescue reached the public, her combination of bravery and simple virtue set her out as exemplary, and led to an uneasy role as the nation's heroine. Grace and her father were awarded the Silver Medal for bravery by the Royal National Institution for the Preservation of Life from Shipwreck, later named the Royal National Lifeboat Institution.

In 1842, Grace fell ill while visiting the mainland and was in convalescence with her cousins. Grace's condition declined, however, and in the final stages of her illness she returned to Bamburgh where she died of tuberculosis in October 1842, aged 26. 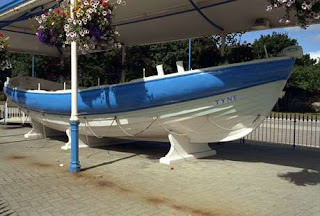