Up for auction - genuine vintage and antique coffee memorabilia

We all know coffee is a consumable item and to some a product of craft, but for others the interest extends to label design and packaging. From splashy colours and intricate hand drawings to clean minimalist lines, coffee packaging design is an important element in selling ones product.

There is today a somewhat artistic curiosity of past designs and labelling of products, earlier this year a fascinating auction took place in a New York based auction house - Weiss Auctions.

The first roughly 76 coffee-related lots were auctioned in June 2017 at Weiss Auctions on Long Island; Phil Weiss of Weiss Auctions confirmed that the auction will be part 1 of what could be 10 or more sales in all, considering the sheer abundance of stuff. With other auctions planned for later this year and going on into 2018. 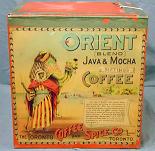